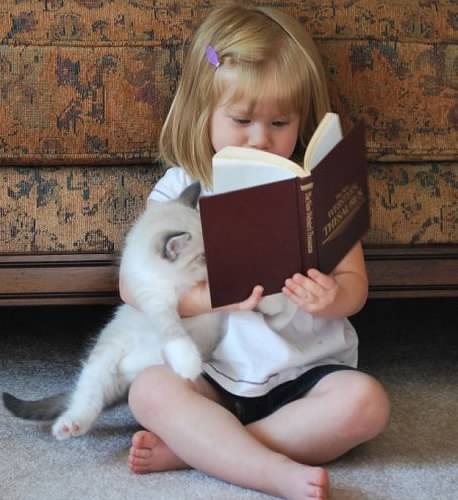 Ragdolls come in "3" patterns. These are the Color Point, the Mitted and the Bicolor.

The Ragdoll is one of the Larger Domestic Cats with Males weighing from 14 to 20 pounds and Females weighing from 8 to 14 pounds. Although larger cats Ragdolls are gentle, docile and extremely sociable. They make wonderful companions for the young and old. They get their distinctive name Ragdoll from the ability to go limp while being cradled on their backs. I find this especially true of the kittens who love to be lavished with attention while in this position.They also like to read a good Book as you can see HERE with our Grand Daughter Avery

Another unique feature about the Ragdoll is even though long haired, they have a relatively non-matting, low maintenance coat.They love to be brushed but often need little grooming.